How to wear Boyfriend Jeans – Do’s and Don’ts

So how to wear Boyfriend Jeans??? Sure, models and skinny jeans are something of a match made in heaven, but as it turns out, even the leggiest of catwalkers can’t resist a pair of classic boyfriend jeans.  Blame it on the sweltering heat, or the the style’s innate sense 0f cool, but now more than ever it appears that the models are swapping their hip-huggers in favor of the menswear-inspired staple, and inspiring new ways to wear it at that.  Taking a cue from their winning ensembles, we’ve put together a master list of the do’s and don’ts to wearing boyfriend jeans like a top model, because let’s face it, nobody wears them better than these ladies.  Scroll through the photos below and get a jump on slouchy summer style today!

1. DO wear boyfriend jeans out on date night.

For years, we’ve been led to believe that skinny jeans are the only pant option available to women on date night.  Well, no more!  While out for a romantic evening with her hubby John Legend, Chrissy Teigen proved that slouchy, distressed denim can look not only polished, but also incredibly sexy.  Even though her shirt is oversize, she opted for a billowy silhouette and loosely tucked it in for a dressy blouse effect. The style star also stuck to a lean tailored fit for her jeans, which looked all the more lovely when paired with barely there sandals and structured shoulder bag.  Kudos, Chrissy! Another big misconception surrounding boyfriend jeans is that they can only be worn with a pair of very high heels, but that couldn’t be farther from the truth.  While you can feel free to dress them up with a pair of stilettos, we’re here to remind you that it’s OK to completely casual and slip-on your favorite pair of sneakers.  Just look at Alessandra Ambrosio, who was recently spotted stuttering around LA in a pair of baggy boyfriend jeans paired with a statement sweatshirt and espadrilles.  The look was balanced, relaxed and downright cool. 3. DON’T be afraid to get a little tough with them.

While the menswear-inspired style does pair effortlessly with girly tops, ladylike heels and modern accessories, let’s not forget that the boyish bottoms got their start on the ’90s grunge scene. Like Candice Swanepoel, we love the idea of channeling those early Nirvana days, and pairing a ripped style with punk-inspired motorcycle boots and oversized mens shirts tied around the waist. 4. DO wear your boyfriend jeans low on the hip for slouchy swagger.

We’re not ones for ’sagging’ of any kind, but when it comes to boyfriend jeans, we’re willing to make an exception.  Unlike ‘mom jeans,’ the boyfriend style is meant to be worn low on the hip, which is part of what makes this wardrobe staple so effortless and cool.  And yes, comfortable too! 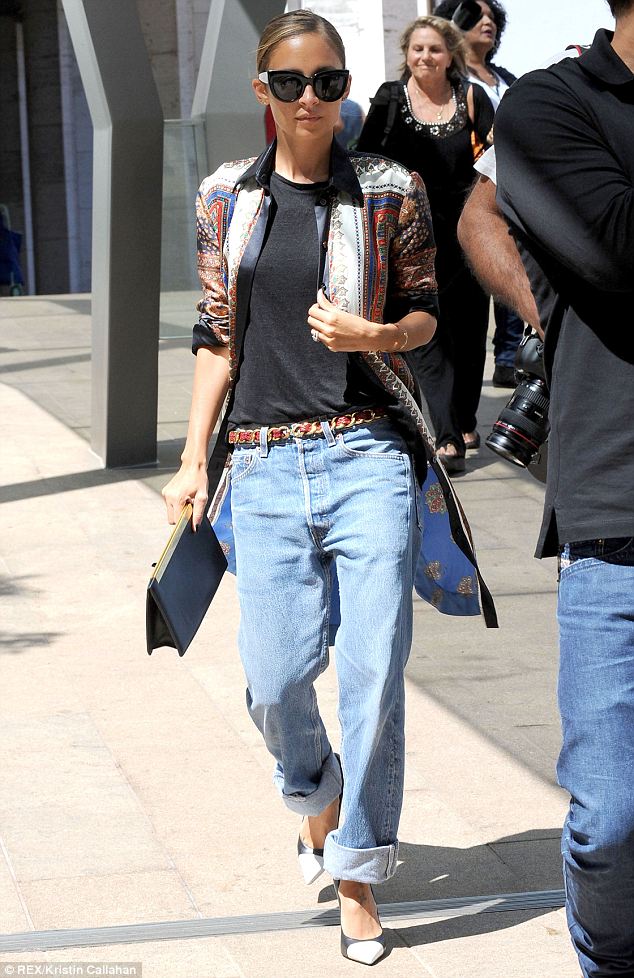 And just for the love here is some more inspirations as to how to wear Boyfriend Jeans….